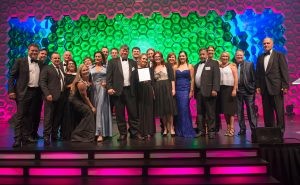 Ray White Ipswich would not be the award winning real estate agent it is today without the “monumental mistakes” principal Warren Ramsey and his father Geoff made when they took over 23 years ago. Those mistakes were a long way in the past on Thursday night as the Ipswich team took home seven awards, including the top award, at the annual Queensland Ray White awards. The local team, named the number three office in the state, beat almost 200 other contenders to sales team of the year and best sales team, Trent Quinn won the APN Marketing award and Neil Mundy and Aidan Wales were crowned elite sales people.

They join the office’s four A-list sales people, Les Svensson, Aidan Wales, Neil Mundy and Amie Palmer, recognising excellence in real estate. The Max White award, real estate’s top gong, went to Mr Ramsey. “I never would have expected that in my wildest dreams,” he said. Mr Ramsey said his past on the land in the Northern Territory and early days in business with his father were the ingredients which made Ray White Ipswich so successful. “I think a lot of that transfers, from working out west, into play in any business – working with what you’ve got, you’ve got nobody else to help you, you have no opposition, problem solving and just dealing with it,” he said. “Probably retraining myself in etiquette from the bush to the city was hard.

“We were a bit rough and tough out in the scrub and I had to refine myself considerably as I grew myself within the office.” Warren and Geoff took over Ray White Ipswich in 1993 before Warren bought his father out in 1999. “It was absolutely a learning curve, the office is probably so successful today because of the mistakes we made early in the piece,” he said. Mr Ramsey said 23 successful years in business, hundreds of property sales and this week’s awards were a product of a good team and community support. “The best moment is watching new people grow into the industry and to become premier and elite A-listers, getting them to the top of their games and into financial success as well,” he said. “The biggest thing is getting more of my guys to elite stars within Ray White so they’re successful in their own right. “That gives me more joy than anything else, seeing my guys do really well,” he said.

Back to all news
Up to Date