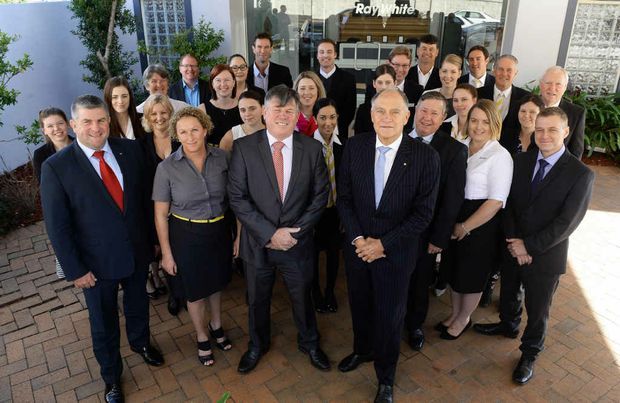 RAY White Ipswich principal Warren Ramsey has a simple message for anyone who believes that the dream of home ownership is out of reach; look here.

With the median house price sitting in the low $300,000s – about half that of Brisbane – it is no surprise that first home buyers and investors are looking at Ipswich.

Mr Ramsey’s Limestone St office has been capitalising on the interest that the city’s property prices have whipped up across the country.

Coming off a record month for the business, in which it sold 53 properties, a buoyant Mr Ramsey received a pat on the back from the third generation leader of the Ray White franchise, Brian White, yesterday.

“The Ipswich market is starting to become a relevant topic to people outside the area,” Mr Ramsey said.

“Brisbane and the eastern capital cities have been going up while Ipswich has been falling; the gap is getting wider.

“Up until last month there were still houses in Ipswich selling for $180,000.

“The return you can get on an investment compared to other parts of the country is making Ipswich a hot topic interstate.

“People say that young couples can’t afford a house these days; well I say they can if they look here.

“We are only 30 minutes from Brisbane and the train line now goes out to Springfield.”

The interest in Ipswich is also having a dramatic effect on the number of rental properties the Limestone St office is looking after.

There have been 133 new rentals so far this year, which is only 12 fewer than the business’ yearly target.

Mr White was scheduled to visit the Ipswich office yesterday, but with the month they’ve just had, the timing turned out to be perfect.

He said he was astounded at the progress that had been made in recent years.

“I wanted to come here today to congratulate Warren and the team and tell them how impressed I am in what they set out to do and what came to pass,” Mr White said.

“This sort of result doesn’t just happen; you need persistence and determination.

“What Warren has done here has been astonishing. He has created a market share in an established city that’s pretty well unrivalled anywhere.

“Thirty per cent in this area is unique.”

Back to all news
Up to Date